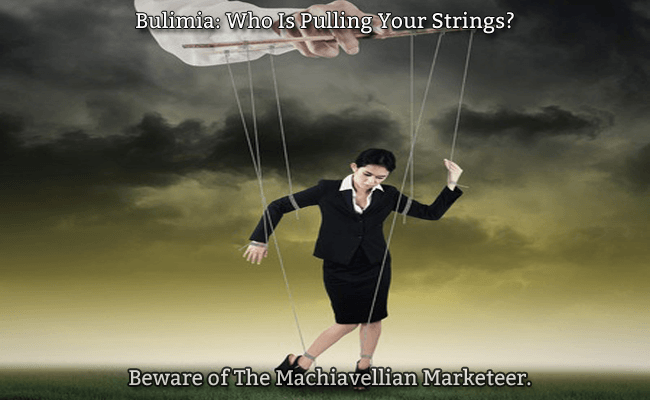 The media gets a lot of blame for triggering body dissatisfaction, low self-esteem and eating disorders. And perhaps it’s fairly placed when you consider how they bombard us with all those images of airbrushed ‘beauty’ and ‘perfect’ bodies.

But that is NOT the end of the story. In fact I think we’re being manipulated in many more subtle ways, such as “Product Placement”.

When the seasons change, the message changes.

That means that in a single year, dieting rates among American women increased fully 5 percent. No surprise, dieting is most common when the mercury rises. Dieting among American women age 25 to 54 peaked this year during the week of May 24th, 2010 when a reported 48.5% of women said they were currently dieting. In previous years, dieting peaked on August 17, 2009 and on July 15, 2008 when 47.5% and 44.2%, respectively, of women were dieting.

In fact, the spike in dieting during swimsuit season is equaled only by the plunge each autumn when the percentage of American women dieting drops to the lowest levels of the year.

How much are we being manipulated by product placement that encourages us to eat in ways that are far from healthy?

Out habits are carefully monitored and then used against us. Rather than encourage us to eat in healthy, life affirming and sustainable ways, products are placed strategically to simply increase the industry’s bottom line.

Come autumn it’s been noted we’re fed up dieting, so now is a good time to tastefully package, promote and strategically place those highly processed packaged ‘foods’ – calorie high but nutritionally redundant– ramping up sales and profit and increasing our waistlines.

Come Spring the marketers will be on hand to resolve our problem with another round of diets and slimming supplements, pills and lotions, detoxes and fasts.

The ‘famine’ of the summer is replaced by the ‘feast’ of autumn.

This kind of manipulation is not only tough on those suffering from negative body image, disordered eating and eating disorders such as bulimia but is also potentially harmful and dangerous.

Whilst there’s a natural inclination to eat less in the summer and more in the winter, this needs to come from within. That is we need to listen to our own body’s preference and be lead by our own innate instinct rather than be manipulated by a message that seeks it’s own financial benefit.

As I’ve mentioned in earlier posts, one of the main triggers for bingeing, bulimia and the maintenance of the binge / purge cycle is dieting!

That’s because dieting – whether that is restricting calories or food types -activates an innate ‘survival mechanism’ in the brain because your body perceives a ‘famine’.

This survival mechanism doesn’t understand you’ve made a conscious choice to restrict your food intake because you want to lose weight, look better or be healthy.  Nor does it understand that food is readily available and in abundance, 24/7.  Instead it responds by creating powerful urges that lead you to think about food and actively seek it out.

And when food is found, those same urges cause you to eat as much as you can to ensure you have the calories and fuel to survive.

And unfortunately it doesn’t take a summer of dieting to set this off.  Long before autumn when those packaged foods are strategically placed, you maybe struggling to resist them. But imagine how much harder they are to resist when they are right in front of your face and you are already hungry or deprived when shopping?

Now I don’t know about you but I detest being manipulated in this way.

What about you? Is your blood boiling? Are you concerned about the level of manipulation we’re being exposed to and the detrimental impact it’s having on our health and wellbeing? If so, share your thoughts…

Share6
Tweet
Pin
Share
6 Shares
Posted in Blog
← Suffering from Bulimia? Why Your Relationship With The Mirror Keeps You TrappedRevealed: The Hidden Dangers of Allowing Society & The Mass Media To Define Contemporary Beauty →