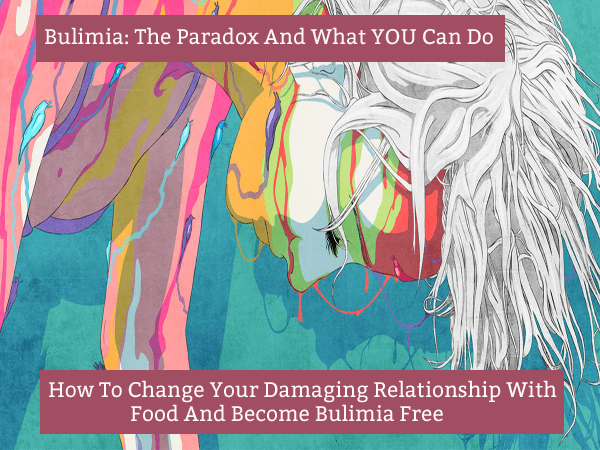 Did you know, under eating will eventually lead to overeating?

It’s a paradox I explored in my last post when I discussed the dangers of a restrictive diet and the similarities between the symptoms of under eating and the side effects of bulimia.

You see whilst food is essential for our survival, dieting and eating disorders such as bulimia can disrupt your natural body rhythms and processes which can cause havoc with how you feel.

AND because you are instinctively programmed to seek out pleasure, bingeing can quickly become habitual because momentarily, it makes you feel good.

It’s time to address your fear of food…

If you suffer from bulimia, one way to kick-start your recovery is to start eating normally again. Now I know this sounds counter-intuitive. After all, perhaps the dieting started because you wanted to lose weight. Surely eating again will simply make the trigger problem worse?

That’s because once you start to eat normally, you’ll convince your Stone Age brain that food isn’t scarce. In turn your archaic brain won’t need to create those uncontrollable urges designed to make you eat. What’s more, if you’re no longer under-nourished, the side effects you associated with bulimia can start to fade. As you can see, it’s all connected.

But unfortunately, as you know it’s not as simple as that.

That’s because even if you have a logical understanding of the need to eat properly, you also need to understand how your fear of food has helped bulimia become entrenched.

If you’re struggling to start to eat normally, it could be because you’re encountering some of the following common problems:

In fact this could be the trigger that started you off on the slippery slope to bulimia. You may be wary about eating normally because you don’t want to gain excess weight – and you’ve convinced yourself that the cycle of bingeing and purging is helping you to stay slim.

2.     The bingeing and purging has become habitual:

Whilst bingeing can be an instinctive response to insufficient food, purging requires a conscious decision to force yourself to be sick. And you’ll probably remember how hard it was the first time – but the more you did it, the easier it became until eventually the cycle became habitual, addictive and part of your identity. And as we know, it’s not easy to break an addiction.

People with bulimia often develop an irrational fear of food. In addition, they can become caught up in labelling foods as good and bad. In turn, if you attempt to eat a normal diet, you risk making a big deal about what you can and can’t eat which means your focus stays on the food.

The media constantly communicates subliminal and overt messages about how you should look AND what you should or shouldn’t eat. These messages can be confusing, conflicting and leave you feeling anxious and unsure about what to eat. For example, Weight Watchers has recently endorsed McDonald’s food in a link-up that will see Weight Watchers promote a number of “suitable” items from the fast food chain’s menu to it’s dieters. I’m not sure what message this conveys, but in my opinion, there’s certainly a conflict where fast food is linked to “healthy eating”. In addition, everywhere you look you need to navigate the latest fad diet often juxtaposed alongside delicious cake recipes which are next to pictures questioning how “good” the latest celebrity looks in a bikini. It’s a minefield and if you listen in too closely, you beliefs about what’s right for you can be unhelpfully influenced.

So part of your recovery must involve creating and following a structured eating plan. In short this is a conscious decision to eat a Balanced Diet that contains enough calories and the right balance of nutrients to sustain you.

For me this involved eating three pre-planned meals every day along with three snacks – in effect eating around once every three hours so that you don’t get too hungry. And because my body got to know it would get food frequently, the cravings and demands calmed down.

But the real secret to making this work is to plan what you’ll eat in advance. Do this and you’ll remove the focus from food. In addition, you’ll allow the following to happen:

In addition, it’s important to get out of the “diet mode” and avoid labelling foods as good or bad. The reason for doing this is if you tell yourself your not allowed “bad” foods (which may include cakes, chocolate, biscuits etc.) you’ll simply crave them. However, if you allow them to be consumed (in moderation) as part of your structured eating plan, because they’re “permitted” you won’t obsess over them, they won’t have a hold over you and you become free…

With a structured eating plan designed to ensure you have sufficient calories and nutrients, you can start to move beyond bulimia.

If you’ve pre-planned what you will eat, and you’ve ensured you’re getting a balanced diet that’s designed to give you the fuel and nutrients your body needs, your life will no longer need to centre around food.

When you’re struggling with bulimia, food becomes an obsession.

Food is placed at the centre of everything you do and it becomes overwhelming and consuming. In comparison, take the spotlight off food (because it no longer has a hold over you) and a bright future opens up.

Instead of trying to control those cravings, you can focus on what you love. You can start to explore a new beginning and shift your thoughts to a place that will empower you – not hold you back.

Even if you feel you’re in a dark place right now, there is life beyond bulimia. And with a few simple steps YOU really can embrace and live a life where you are bulimia free. You can start now by watching a FREE video series that will give you greater insight into what’s really going on and what you can do immediately to set yourself free. Simply pop your details into the box at the top of this page and I’ll send you access to the videos.  Do it now – don’t waste a moment more of your life to bulimia and I’ll see you in the first video.

N.B: This article contains general advice based on my own experiences and research. IT IS NOT intended to be used as a substitute for expert medical and nutritional advice. If in doubt, or if you’re concerned about the physical or emotional symptoms you’re experiencing, do seek help from your GP.