When we believe something to be true it informs our everyday behaviour. Unfortunately there are a lot of myths, misconceptions and false beliefs around Bulimia which can prevent you from fully engaging in, or even starting recovery.Perhaps when you see that some of the deeply-held beliefs you have about Bulimia are incorrect you may feel more ready to give it up.So let’s have a look at the most common ones that could be holding YOU back…

“There Must Be Something Wrong With Me.”

Whilst it is true that you can certainly feel like you’re going ‘mad’, I know I did, the chances are that there’s nothing wrong with you. 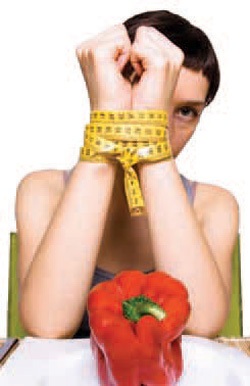 There’s a whole list of psychological symptoms including anxiety and depression, all of which can be caused by a restrictive diet.

Think about it – how did you feel before you started dieting?

You might not have been feeling terrific, which is possibly why you went on a diet in the first place, but I’m guessing it was actually a whole lot better than you feel now.

Most people feel bad about themselves from time to time and have feelings of ‘not being good enough’, ‘not worthy’, ‘incapable’ or ‘powerless’, but you do not have to be a victim of your own thinking.

Simply by learning to eat normally your mental well-being will rapidly improve and by discovering how to use your thinking in empowering ways you will become confident, self-assured and happy.

“If I Stop Purging I’ll Get Fat From Bingeing.”

Any form of purging is highly ineffective as a weight loss strategy.

Whilst it starts with a binge it is the purging that makes you hungry and keeps you bingeing as your body is kept in a state of distressed hunger.

Your body needs a certain amount of calories to survive and if it is not getting what it needs it will let you know. Your body will cause you to obsess over food and you’ll get strong, powerful hunger cravings which will eventually lead to bingeing.

If you stop purging NOW and eat healthy, nutritious meals on a regular basis, the desire to binge will fade. The trick is not to let yourself get too hungry.

“If I Give Up Bulimia I’ll Put On Weight.”

Bulimia is simply not a good weight loss or management strategy.

So all the shame and suffering you go through is for nothing.

And if you’ve been purging for sometime your body will be holding onto all the food it can get, storing what it can as fat and slowing down your metabolism. One of the side effects of a slowed metabolism is that the transit of food through your body is slowed, leading to constipation and feeling fat which can both trigger bingeing and purging.

It has been shown that bingeing and purging actually increases weight over time as the body slows down your metabolism.

It may well seem like Bulimia helps you cope but all it is really doing is distracting you from uncomfortable thoughts and feelings. Bulimia doesn’t help you cope – it makes things worse.

The distressed state of hunger warps your thoughts and lowers your confidence, making you anxious and indecisive. It may give you a short break from all the stress and problems Bulimia has caused in the FIRST place, but this is pretty short lived and is soon replaced by feelings of shame, guilt and self-hatred.

If you think about the amount of energy, time and commitment it takes to be bulimic and you directed it towards something you loved, what do you think your life would look like?

“Bulimia Gives Me Control Over My Life.”

Any feelings of control over your eating quickly go as the habitual bingeing and purging takes over you life. But habits can be broken or replaced.

Think about it for a moment, who has more control: someone who can happily eat what they want, when they want, or someone who obsesses about food, and regularly binges and purges?

“Being Thin Will Make Me Happy.” 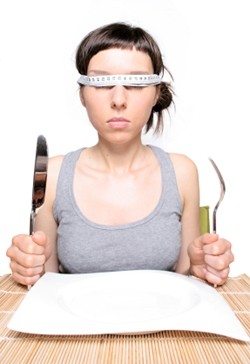 This is a very pervasive myth – one that is used and perpetuated by the media.

Happiness does not automatically follow weight loss as I can personally attest. Whilst there is a buzz at the beginning of any diet, this is soon replaced by anxiety and worry as you and your body go to war, as it wants and needs what you’re trying to deprive it.

Being happy comes from within. It is innate, but it gets masked by the eating disorder. You can be happy regardless of your weight or circumstances .

This simply isn’t true. There are many people, myself included, who have fully recovered.
However, there’s a lot of confusion regarding what it means to be fully recovered or whether recovery is possible.

People may say it’s a hard or impossible to recover, or think it is something others achieve but not themselves because they…

“Bulimia Is Not Life Threatening.”

Bulimia can most definitely be a life threatening condition. By continually purging, the body is losing vital nutrients that are essential to life: Heart attacks and strokes are the two most common fatalities due to the loss of potassium and other electrolytes. Stomach ruptures, ulcers and tears in the oesophagus are common, as stomach acids eat away at the insides, causing serious damage.

Getting help as soon as possible may therefore prevent serious long-term damage to the body.

“There’s A Deep Underlying Reason That Must Be Uncovered Before Recovery Is Possible.”

Whilst this is certainly the line some therapies take, many of the most successful treatments focus on the thoughts and behaviours involved in Bulimia rather than finding why someone has developed the eating disorder.

Personally, I believe that it is likely to be a combination of factors, so it is far better to focus on recovery and what you’d love to create for yourself and your life as opposed to the origins of your Bulimia.

However we are all different and what works for one doesn’t necessarily work for another – the important thing is getting help and support that works for you.

Most people with Bulimia are within their normal weight range for their age and height –the weight they’d be if they didn’t have Bulimia.

And many bulimics actually have a higher weight than their pre-Bulimia weight.

Whilst many bulimics lose weight initially, like everyone suffering from bulimia they too will experience significant weight fluctuations.

So all for controlling your weight.

Many sufferers find that once their eating becomes normalised and the bingeing has stopped, they’re able to maintain a lower body weight without dieting, as their bodies come back to balance.

Your body will fight against you if you try to keep it below the weight at which it operates best.

“Bingeing Means Eating Huge Quantities Of Food In One Sitting.”

Whilst a binge is normally considered to be eating huge quantities of food at any one time, someone with Bulimia may not always eat a huge amount – especially when eating in company – just too much for them or a dietary rule is broken and they then go on to consume more than they want and that may look quite normal to an onlooker so making a diagnosis on food intake alone can be difficult.

A rising number of men are also suffering from Bulimia. Men are becoming just as concerned as women about how they look and are also willing to go to extremes, although they may be able to hide it better as excessive exercise can be seen as more ‘normal’.

And as in women Bulimia is not age restrictive, with many young boys also suffering.

“I Only Do It Occasionally.”

Whilst the clinical diagnosis of Bulimia is when binging and purging both occur, on average, at least twice a week for three months don’t lull yourself into a false sense of security by thinking you’re ‘not that bad’.

You may think you’re in control, but that control quickly slips away as the addictive habit takes over and binging and purging becomes automatic, creating a cycle that is hard to break.

The more ingrained the thinking and behavior around Bulimia gets, the harder it becomes to let go.