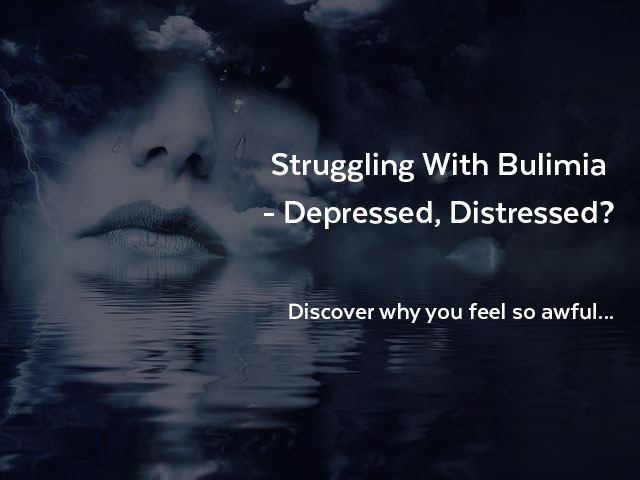 The Side Effects of Under-Eating:
Could This Be Why You Feel So Awful?

So, before you write off the idea that too could be suffering the side effects of under-eating, do any of the following sound familiar?

I know you might think you are eating plenty, too much even, but if you’re experiencing some of the above symptoms, it could be…

YOU ARE SUFFERING FROM THE SIDE EFFECTS OF UNDER-EATING OR MALNUTRITION!

Aren’t you trying to create a calorie deficit in some way or another by controlling your food intake, throwing up or over-exercising, all of which ultimately promote the side effects of under-eating?

And I’m going to put it to you that under-eating aka ‘restrictive dieting’ could have been the cause of your bulimia in the first place.  This is important because discovering the true cause of bulimia will not just save you time in the recovery process but it will lead to you being free from bulimia forever.

Take your mind back in time, back before bulimia: “Had you been controlling your food in some way?”

“Were you dieting in some way?”

Or did you have your own self-imposed rules and regulations of what, how and when to eat?

If this is you, you are not alone.

It would seem, and almost without exception (because there is always an exception to the rule), regardless of any other ‘cause’…

everyone who’s had bulimia or is struggling with bulimia had been controlling their food intake before bulimia developed.

You see when human beings restrict their food intake to below the requirement for their Basal Metabolic Rate (BMR), which varies from person to person, for a period of time and that period doesn’t have to be long, the brain’s survival mechanism is triggered causing…

The thing is OUR BRAINS ARE HARDWIRED TO BINGE.

Regardless of your background, psychological or emotional issues, your body image, self-esteem or personality traits, if your brain perceives your body is not getting enough energy (food) the STARVATION RESPONSE is triggered. You will obsess about food, have urges to binge and feel compelled to seek out food and when found, eat as much of it as possible.

And because food restriction (whether by dieting and or purging) is seen as a threat to your survival, the FIGHT- FLIGHT RESPONSE is [automatically] triggered.

As this is not a threat that you can ‘fight’ or ‘flee’, the stress hormones that have been released do not get metabolized. Instead, they build up in your body, ramping up feelings of stress, nervousness, and anxiety.   ‘Fight or Flight’ is intended to be a short-term response to danger, however under the conditions, your body finds itself in, the response remains activated.

And in this high state of alert, there is a tendency to…

Does any of the above sound familiar?

Couldn’t it be that it is the side effects of under-eating that are making you feel so awful?

And this could make you furious…

The Side Effects of Under-Eating Have Been Known About For 100 Years.

You might be surprised to know that the negative physical and psychological side effects of undereating have been known about since 1917!

Check out the 1917 experiment documented in “Human Vitality & Efficiency Under A Prolonged Restricted Diet”  https://archive.org/stream/humanvitalityan00benegoog#page/n7/mode/2up

The Ancel Keys  Starvation Experiment documented in “The Biology of Human Starvation” http://en.wikipedia.org/wiki/Minnesota_Starvation_Experiment and a

NOW FOR SOME GOOD NEWS

Most, if not all of the side effects of under-eating disappear when you feed your body with sufficient calories and nutrients and believe me this can be done without getting fat or gaining weight.

In fact, many bulimics actually lose weight when they replace bingeing and purging with healthy patterns of eating.

“People who feed themselves regularly and reliably with foods they like, have better health indicators, lower body weights, and do better emotionally and socially” Ellyn Satter MS, RD, LCSW, BCD

For some people, this is relatively easy but for the majority of people struggling with bulimia, normalizing eating can be difficult because of underlying fears and beliefs.  This is even more challenging if you’ve had bulimia for some time due to the habitual nature of the behavior and unconscious programming to binge under certain emotional conditions.

If you’d like some help please email me at Julie@BulimiaFree.com.