The Men Who Made Us Thin & The Darker Side of Dieting

I’ve been gripped by Jacques Peretti’s new BBC documentary series – The Men Who Made Us Thin.

If you struggle with your weight and feel the need to diet, you’ll find Episode 1 especially relevant. In the programme Jacques explains the history of the weight-loss industry and reveals the scientific studies that prove diets DO NOT WORK. The programme also includes a number of fascinating interviews with some industry leaders including the inventor of Slim-Fast and the copywriter who made slimming drinks trendy.

You’re probably aware I’ve recently published a new eBook – Are Your Dieting Strategies Killing You? The BBC documentary echoed a lot of my book’s content and it’s great to finally see the mainstream media proactively tackling some of the myths that surround dieting.

If you haven’t watched The Men Who Made Us Thin, I urge you to make time for it. It’s an hour long and is utterly compelling. You will find the video at the end of this post so you can watch it at your leisure.

In addition, I’ve written this blog to summarise some of the key discussion points.

Selling solutions so we can be thin

The opening of the documentary powerfully sets the scene.

“Everyone wants to be thin. It means beauty, success, desirability”.

Glossy magazines, TV ads and even celebrity endorsements are hard at work persuading us of the need to achieve this highly desirable image. And the challenge – most of us are not genetically designed to have the look of those airbrushed, stick thin models we see in the media. But because these images are so culturally desirable, there’s a thirst to find the solution that delivers this look.

Enter the diet industry. Since the 1940s they’ve “helpfully” responded by offering a constant stream of dieting solutions. Whether it’s Slim-Fast, Weight Watchers or the latest trend (such as Six Weeks to OMG – How To Be Skinnier Than All Your Friends) we’re bombarded with an ever-extending list of strategies, tactics and techniques to try.

But amazingly, when you investigate further, you discover these diets are often based on false promises. Peritti discovers the common pattern is people try a diet, lose weight, but then gain that weight again AND put on a little more. Shockingly it means you’re probably better off NOT dieting in the first place.

The billion-dollar weight-loss industry is “selling us the dream of being thin through dieting… and left us fatter than ever”.

Yet despite this fact, Peretti claims that 27 million people in the UK have tried to lose weight in the last year. And more often than not these people have tried (and failed) with more than one diet.

But just where has this obsession with dieting come from? I think you’ll be shocked to discover where it all started…

How one arbitrary decision kick-started the diet industry

I was amazed to discover the modern dieting trend was started not by scientists, but by the insurance industry. Back in the 1940s, Louis Dublin was the chief statistician at Metropolitan Life. At the time this was the biggest insurance company in America. Dublin was reviewing MetLife’s premiums and discovered (what he believed to be) a link between weight and age of death. He assessed the age customers died with their weight when they took out their policy and concluded that people who were overweight died young.

But here’s the interesting bit.

In response to this Dublin created charts to help people understand what their ideal weight should be. BUT his figures were grossly flawed. He didn’t use any statistical data but instead arbitrarily decided where the overweight line should fall. The impact was that suddenly millions of perfectly healthy Americans were classified as overweight. And to make it worse these charts became widely accepted by GPs and the US government. This decision by one man had a profound impact on America: Millions of perfectly healthy Americans believed they were overweight and were encouraged to diet.  It spurred an obsession with weight and appearance and laid the foundations for the weight-loss industry to boom.

Diet failed? It’s NOT your fault

Since the 1940s we’ve been subjected to pressure and media encouragement to look thin. And whilst we do have an obesity crisis, how much of this has been powered by failed diets started because of the motivation to have an unachievable body image.

In my opinion food has become the cause of much misery as diets fail and people get fatter. But would you be surprised to learn that your failure to lose weight is not your fault.

Now the diet industry won’t tell you this because your failure is their profit. They know there’s overwhelming scientific evidence to prove dieting can lead to weight gain in the long run. What’s more this knowledge isn’t new. In fact this insight was discovered as far back as 1918 when the University of Massachusetts conducted its groundbreaking study to discover the physical and mental impact of a restricted diet. So whilst you may lose weight in the short-term, the likelihood of sustaining that weight loss, even after two years is very small.

But here’s the crux.

The failure to successfully diet coupled with the persisting message that thin is beautiful keeps the diet industry buoyant by setting the scene for fad and yo-yo dieting. And the industry responds with a vengeance. It seems that each week a new trend emerges that promises the earth and then distances itself from the disappointment inevitable failure breeds.

It makes my blood boil to think people are being manipulated into believing they are not good enough as they are. I speak to so many women who struggle with their weight and see food as their enemy. They have a desire to get thinner thighs or a smaller bum, and the disturbing fact is, more often than not they DON’T need to lose weight.

I can’t think of another industry that thrives despite such huge failure rates. And I’m disturbed by the normalisation of dieting, because dieting, whether by restricting calories or food types, initiates a powerful survival mechanism that slows metabolism, stores fat and increases your appetite. Food is our life fuel and your body is programmed to ensure you have enough of it. Dieting for most people is not the right lifestyle choice. It puts you and your body under unnecessary stress and as well as making you feel worse, it can cause havoc with your physicality. It can even lead to bulimia.

Discover the truth for yourself NOW

I reveal more about the dark side of dieting in my eBook – Are Your Dieting Strategies Killing You? Revealed. If you haven’t read it yet I urge you to CLICK HERE now and download it. It’s completely free. 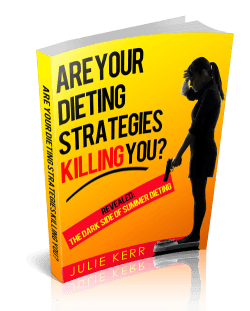 It could help you transform your relationship with food and discover a new way to love the skin you’re in.