There’s no escaping the fact that bulimia is a lethal eating disorder with the potential to kill.

That’s because, unchecked, bulimia will continually take from you physically, emotionally and mentally. And in turn it will kill your dreams, your happiness and your self-confidence.

But worse than that – It can also take your life…

Now these may be harsh words but I’m speaking from experience. As a long-time sufferer of bulimia I know I was misguided. I resorted to drastic measures including a variety of slimming pills to divert my attention away from my desire to eat in an attempt to prevent myself from bingeing. I’d kid myself I was in control but this strategy led to an increasing dependency on more or stronger substances.

In fact, it was only after I’d freed myself from the regular bingeing and purging that I fully accepted just how badly I’d treated my body. And after years of self-destruction, I’m grateful I found a way to free myself and create a life that I now love.

And so yesterday I was deeply saddened by the tragic cover story in the Daily Mail. It read…

You may have seen it too.

The story talks about Sarah Houston. A 23-year-old medical student (and recovering bulimia sufferer) who tragically died after secretly taking DNP along with prescribed antidepressants.

DNP is banned for human consumption BUT is a legitimately-used pesticide. However, because of DNPs availability on the internet in capsule form coupled with its ability to increase the body’s natural metabolic rate, some people use it as a slimming pill.

Wakefield coroner Mr Hinchliff acknowledged this. He said: “The only motive for manufacturing a toxic substance as a slimming aid would be to profit from people who have the misfortune of having a condition such as Sarah’s”. (Source BBC).

You see Sarah had also been tackling bulimia. The Daily Mail reports that she had been bingeing twice daily and purging eight times a day but was recovering. Her purging had reduced to once a fortnight and her family believed that: “Sarah had made tremendous strides to overcome her condition. She was the best she’d ever been”. (Source: BBC).

The Mail also reports how Sarah’s Psychiatrist acknowledged that: “Her drive to lose weight was always there and she was fearful of weight gain. She was most likely taking DNP to satisfy her own need to control her weight”.

And as a sufferer of bulimia you know of course that the fear of weight gain can drive you to take drastic action – whether that’s bingeing and purging or something more sinister such as banned, toxic, potentially lethal pills.

Where’s this pressure coming from?

So why would a seemingly healthy medical student be driven to such drastic measures? Especially given her outward success?

If you have bulimia you’ll be able to empathise.  You’ll be familiar with the overriding feeling that for whatever reason you’re just not good enough. And the reasons vary. You purge so you don’t get fat. You use food as a means to suppress the thing that’s missing from your life. Your self-esteem and confidence are non-existent and food temporarily makes you feel better about yourself.

What’s it for you?

In addition, there’s the pressure from society (as a quick aside I couldn’t help but notice the conflicting messages on the Mail’s front cover. Take a look and you’ll see Sarah’s story juxtaposed alongside a banner ad promoting a 2 Day Summer Diet along with an advert for the chemist Boots). 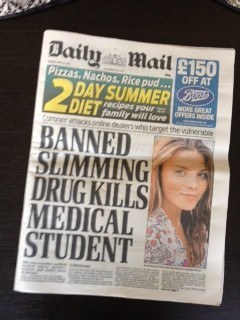 You could argue that the constant bombardment of images and messages can leave  women and now also men, feeling confused and inadequate –  driving some to take drastic measures.

In fact many people will place the blame for this pressure on society and in particular the media.

But what if the pressure is actually coming from you?

Now please don’t instantly dismiss that comment. You see if you have a tendency towards a negative bias, you will instinctively be more critical of yourself. You will always fail to see the beauty, potential and vibrancy that others observe (this blog explains more). And it means you are more likely to be influenced by what you interpret the media to be saying.

It’s time for you to make a choice…

It’s too late for Sarah Houston. Her story is a tragedy and my heart goes out to her family.

But it’s not too late for you.

What’s more, it’s not necessary for you to seek drastic measures to shake yourself free of Bulimia’s deadly grip.

Traditional treatment tends to focus on curing the bulimia. But I think this is flawed. That’s because when you put your attention on the bulimia, you end up exacerbating the obsession for food, diet and body weight. You’ll often find this with traditional counselling and therapy.